Highly Recommended!
Due to their large song list, which contains the best and biggest live band hit songs from today’s very latest hits, right back through the last 50 years, Supernova is considered to be one of the very best live party bands in the UK. With superb attention to detail to your event, and great audience engagement, with Supernova, the dance floor is definitely the place to be!

Special Deals: 20% off all mid-week dates!
Plus, book within 7 days for a free band member DJ service!

Supernova uses a proven winning formula that gets great results every time they play. Firstly, they’re very accommodating and easy-going people – they’re not difficult rock stars to deal with, but just regular, reliable people. Professionally, they know the night isn’t about them. This may be important when your evening’s corporate entertainment schedule is subjected to unexpected delays, long speeches etc. They’ll do all they can to make sure they fit in with your plans as the night unfolds, and always remain flexible to your needs. Also, they have a fantastic lead singer, and a great band of talented live musicians who also sing, and only play songs that are proven mega hits that they know will get the party started every time. All this combined with their years of experience playing only the best live band gigs, and you have a live band that always delivers rave reviews. They generally end up playing overtime because of the encores!

Supernova has a fantastic live sound, due to their state-of-the-art modular sound and lighting system which can suit either an audience of 100 people, or can be maximised to suit 1000 people if required. And though their system is flexible, it is quite unobtrusive and small in size, so they don’t need acres of room to set up in! Usually, a minimum of 12 feet x 10 feet is more than enough. Supernova performs a minimum of 3 x 40 minute sets of live music, and leave a little room for encores as well, which always seem to happen! Also, the guys always bring great party CD’s to play in their breaks too, so you don’t have the extra expense of hiring a live DJ, but if you’d prefer a DJ rather than CD’s, just let us know and we’ll quote one for you.

Supernova would be amongst our top 10 live bands. Click on their 10 audio tracks listed below to hear how great they sound – literally one of the best there is!

Could you please pass on a massive thank you to Supernova for playing at our wedding on Saturday – they were simply amazing! They personalised the evening and engaged all our guests, making it a night to remember. They were great guys and even allowed one of our friends to play guitar with them on one of the tracks. We didn’t want the night to end, and now we’re trying to think of another occasion where we can use them again. Thanks so much! Clare and Steve D, Church Stretton, Shropshire.

Hi, we would like to thank Supernova for a great night last Saturday at our wedding. The band was absolutely superb and everyone thoroughly enjoyed themselves. It couldn’t possibly have gone better! Again, many thanks, Dave and Maggie M, Chesham, Bucks.

Just a quick message to say a massive thank you to Supanova. Everyone is still raving about the band weeks later, and we all thought the music was spot on – so pleased we left it all up to them! We will certainly be recommending them and AffordaBand to anyone who asks. Cheers, Tim H, Stamford, Peterborough.

Just a short note to say how impressed we were with the band Supernova, who played at our wedding recently. The band really kept the party pumping, and so many of our guests have commented on the high standard of the band and asked where we had found them. I also appreciated the band members’ easy-going attitude when meals and speeches ran late etc. Thanks for your assistance in what was an excellent evening enjoyed by all. James H, Barnett, Hertfordshire.

New Songs In Rehearsal:
Beat It – Fallout Boy
I Bet You Look Good On The Dancefloor – The Arctic Monkeys
Sex On Fire – Kings of Leon

Modern Smash Hits!
A Little Less Conversation – Elvis Presley
Chasing Cars – Snow Patrol
Chelsea Dagger – The Fratellis
Drops Of Jupiter – Train
How You Remind Me – Nickleback
I Predict A Riot – The Kaiser Chiefs
I Believe In A Thing Called Love – The Darkness
Mr Brightside – The Killers
Sing – Travis
Somebody Told Me – The Killers
Slide – Travis
Take Me Out – Franz Ferdinand
Teenage Kicks – The Undertones

2000’s!
All The Small Things – Blink 182
Basket Case – Greenday
Big Yellow Taxi – Counting Crows
Buck Rogers – Feeder
Bohemian Like You – The Dandy Warhols
Dance The Night Away – The Mavericks
Dancing In The Moonlight – Toploader
Fight For Your Right (To Party) – Beastie Boys
Have A Nice Day – The Stereophonics
Heaven Is A Halfpipe – OPM
Last Night – The Strokes
Mama Told Me Not To Come – Tom Jones/Stereophonics
Mr Jones – Counting Crows
Parklife – Blur
Place Your Hands – Reef
Sit Down – James
Song 2 – Blur
Teenage Dirtbag – Wheatus
Trouble – Coldplay
Why Does It Always Rain On Me – Travis 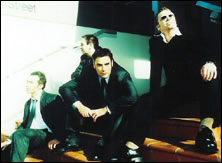 Listen to 10 songs from Supernova:

Band Video Of The Week

From £1075 Highly Recommended! Due to their large song list, which contains the best and biggest live band hit songs from today's very latest hits, right back through the last 50 years, Supernova is considered to be one of the very best live party bands in the UK. With superb attention to detail to your event, and great audience engagement, with Supernova, the dance floor is definitely the place to be! Special Deals: … END_OF_DOCUMENT_TOKEN_TO_BE_REPLACED

AffordaBand UK books hundreds of fabulous live music performances every year throughout the UK and world-wide, and is the UK’s leading live bands and professional DJ hire booking agency.
Call Us: 0845 869 0555
[email protected]